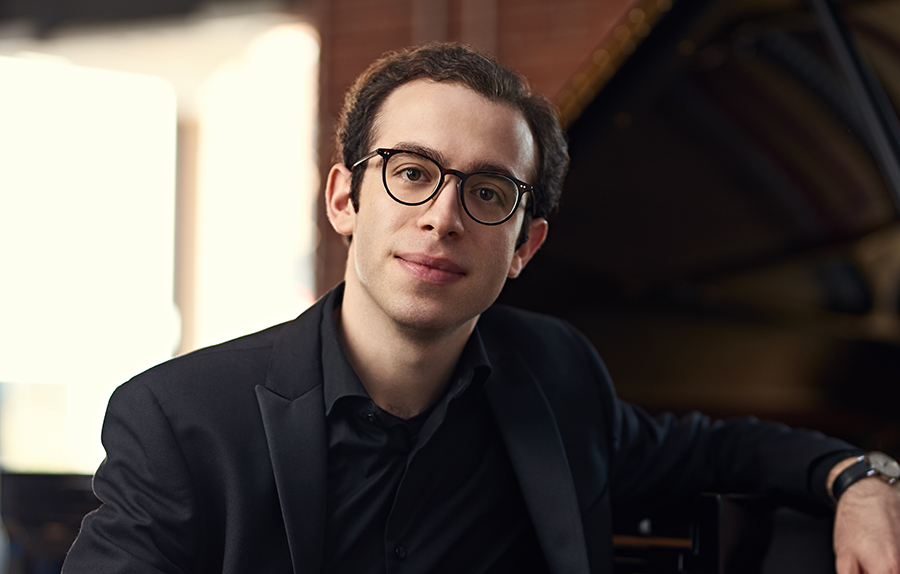 その強固な構想力と完璧な芸術性に脱帽するしかない
“The strength of the conception and the sheer level of artistry compel me to take my hat off to him.”
– – – – – – – ゾルタン・コチシュ―Zoltán Kocsis

Notes of the 2019 program by Performer

This recital presents a number of cross-temporal musical relationships, opening with a pairing of Scriabin’s “Black Mass” Sonata and Bach’s Sinfonia in F minor that highlights features in the work of one composer typically associated with the other — in this case, the intricate polyphonic textures in Scriabin’s Sonata and the daring chromaticism of Bach’s brief Sinfonia. The Sinfonia also serves as a bridge from the Scriabin Sonata to another large-scale work, Bach’s magisterial Partita in E minor.

The second half of the program juxtaposes a work from Schumann’s prime with one of his very last pieces. While the Arabeske is among Schumann’s gentlest works, the Gesänge der Frühe (Songs of Dawn) is one of his most experimental. This is followed by my Arabesque, a piece with structural similarities to Schumann’s work of the same name, before the program concludes with three of my Etudes.

Scriabin’s oeuvre constitutes a fascinating example of a gradual yet dramatic stylistic transformation across a composer’s lifespan. While his early works grew out of a musical language influenced heavily by Chopin, his later music displays a highly experimental approach that stretches the boundaries of traditional tonality. By the end of his life – tragically cut short by septicemia – he had developed a unique and mystical musical language where his synesthesia, interest in theosophy and involvement in the Russian symbolist movement became primary influences on his compositions.

His Piano Sonata No. 9, also known as the “Black Mass” Sonata, is among the most celebrated of his piano works. While the nickname was not coined by Scriabin, he approved of it given the many elements of the work that seem to evoke the Satanic. The piece at first flits between moments of tenderness and terror, and as the work progresses an inexorable acceleration and thickening of the texture hurls the music into a hysterical whirlwind, arriving at a grotesque march before a dissonant and crashing final climax.

Bach’s Inventions and Sinfonias are a series of 30 didactic pieces intended to develop not only a player’s technical capacity at the keyboard but also their understanding of a number of different compositional forms. Among the most remarkable of these is the Sinfonia No. 9 in F minor, one of Bach’s most audaciously chromatic works. With its daring and unusually dissonant harmonic palette, the Sinfonia constantly undergoes a number of modulations and only returns to the home key at the very end of the brief work.

Bach’s Partitas, a set of six dance suites, were written between 1726 and 1731 while he served as Cantor of the St. Thomas Church in Leipzig. Despite being the last set of suites that Bach composed, they were in fact the first works to be published under the composer’s supervision. Of Bach’s three sets of keyboard suites (the others being the English and French Suites) the Partitas are the most creative in terms of structure, with several different styles of opening movements and a variety of interspersed dances featured across the set of six suites.

The final suite of the set – the Partita No. 6 in E minor – is among Bach’s greatest achievements in the genre. In the opening Toccata an extended Fugue is framed by dramatic declamatory sections. The Allemande weaves its way through a number of key areas with a chromaticism of beguiling subtlety, while the following Corrente revels in delicate, nimble passagework. An energetic Air precedes the suite’s center of gravity: the profound and highly expressive Sarabande. A sprightly, graceful Tempo di Gavotte brings the listener to the final movement: a powerfully driven Gigue in the form of a Fugue.

As with many works by Schumann, the Arabeske presents a variety of moods and characters within a short timespan. Charmingly delicate and fluid passages in the home key of C major alternate with darker, passionate sections in foreign keys. The conclusion of this dramatic narrative, a touching and pensive coda, is an iconic moment in Schumann’s piano music.

Schumann’s contemporaries largely considered his last works perplexing and bizarre, attributing the change in his compositional style to the decline in his mental health. However, recent reappraisals of his late oeuvre – unclouded by the assumption that his manic depression would affect his compositional skill detrimentally – discuss previously overlooked qualities of these works that include a rich and audacious harmonic palette and a greater economy in thematic material, as well as the anticipation of compositional procedures of later composers. Some of these stylistic hallmarks are encapsulated in his penultimate work, the Gesänge der Frühe (Songs of Dawn) Op. 133, works that Schumann called “musical pieces that describe feelings at the approach and growth of morning, but more as expressions of feeling than painting.”

The sparse antiphony of the opening movement is at odds with its quietly jarring dissonances, a simultaneous glance to the past and the future that is at the heart of Schumann’s late style. The second movement is arguably the most enigmatic of the set, constantly flitting between different textures and characters and avoiding settling on the tonic key until the very end. The lively third movement is driven by a distinctive galloping rhythm, while the fourth is a poignant Lied for piano that maintains a song-like texture throughout. The reserved, chorale-like opening of the final movement refers back to the atmosphere of the first, before a gentle stream of notes – entering at first almost imperceptibly – begins to fully permeate the texture, carrying the work to its conclusion.

The Arabesque is based on principles that define arabesques in visual art: those of ornate, spiraling and interlacing patterns. The pianist’s hands are superimposed throughout the work, playing intertwined figurations where the individual strands can only be distinguished by dynamic shifts between the hands. Two types of sections alternate with each other – one ascending, the other descending – creating a slow oscillation in the upper half of the keyboard. A study in gentle changes of color and sonority, the shifts between various textures occur extremely gradually throughout the work, in a manner reminiscent of M. C. Escher’s Metamorphosis prints.

Each piano etude is inspired by a specific technical, pianistic challenge that serves as a basis for the textures and figurations. In “Major Scales”, the hands switch between different types of scales in various keys, at first in a coordinated manner but soon falling out of sync and bouncing off each other in different directions. An increasingly chaotic interaction between the two hands leads to the eventual disintegration of the passagework. “Mostly Triads” alternates between various types of chordal textures. A study in frequent changes of hand position, the etude fades in at the top of the keyboard and makes its way downwards, departing at the bottom of the piano’s register. In “Moving Mirrors”, short figurations undergo several forms of inversions and distortions in pitch, accentuation, register, melodic shape and rhythm, and as the rate of these transformations increases the passagework gets increasingly frenetic.